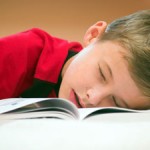 Sleep (or rather the lack of it) is increasingly implicated as a major societal and biological “root cause” of obesity.

Regular readers will be familiar with previous posts on how sleep deprivation affects appetite and energy metabolism.

Now, a study by Canadian Obesity Network bootcamper Michelle Stone and colleagues from the University of Toronto, publish a paper in Preventive Medicine suggesting that kids who reach recommended sleep levels throughout the week are more physically active than kids who don’t.

This study looks at the relationship between physical activity (accelerometry) and reported sleep (parents) in about 850 kids.

The main finding of the paper is that on weekdays, children who slept the least (<9 hours) were more overweight/obese and less active in terms of overall intensity than those attaining ≥10 hours.

Furthermore, weekday-weekend sleep regularity mattered in that overall intensity was higher amongst kids maintaining recommended sleep (>9 hours) compared to those engaging in weekend-catch-up-sleep.

Thus, the authors suggest that appropriate weekday-weekend sleep (regularity) may supports healthy activity and should be an important health-promoting strategy.

Although studies like this do not prove causality, they certainly fit nicely with the rapidly growing body of evidence suggesting that lack of sleep may well be an important “root cause” of the obesity epidemic.

Perhaps time to bring back those afternoon naps?