Does Liraglutide Mimic The Vascular Benefits Of Gastric Bypass Surgery? 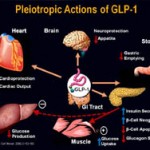 On the last day of the 8th Annual Obesity Symposium here in Norderstedt, Germany, Marco Bueter from the University of Zurich presented a fascinating series of studies (just published in Circulation), demonstrating the “weight-independent” benefits of gastric bypass surgery on endothelial function (using an animal model).

Besides showing that 8 days after bypass surgery rats with diet-induced obesity had higher plasma levels of bile acids and GLP-1, that were associated with improved endothelium-dependent relaxation, not seen in sham-operated weight matched controls, but also that these effects could be prevented by blocking GLP-1 receptors with exendin 9-39.

In contrast, similar effects to those seen on vascular function in bypass rats were seen in sham-operated rats treated for 8 days with the GLP-1 analogue, liraglutide, or as the authors describe it,

Together these studies suggest that GLP-1 may well play an important causal role in the improved vascular function seen in patients undergoing gastric bypass surgery.

These findings are all the more interesting as liraglutide has now been approved for obesity treatment in the USA, Canada and Europe.

While these data are certainly not enough to describe liraglutide as “surgery in a pen”, they are indeed promising in terms of potential benefits of this treatment that may well be weight independent.

All the more reason to anticipate the outcome of the ongoing LEADER trial, which is currently evaluating the effect of liraglutide treatment on cardiovascular outcomes in patients with type 2 diabetes.

Disclaimer: I have served as a paid consultant and speaker for Novo Nordisk, the maker of liraglutide.