Home » blog » Does Food Availability Have Much To Do With Obesity?

Does Food Availability Have Much To Do With Obesity? 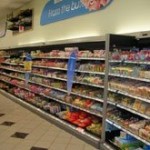 Before you respond “of course” – you may wish to take a look at the systematic review by Laura Cobb and colleagues from Johns Hopkins University, published in OBESITY.

The authors looked at 71 Canadian and US studies that examined the relationship between obesity and retail food environments and concluded that,

“Despite the large number of studies, we found limited evidence for associations between local food environments and obesity. “

To be fair, the researchers also concluded that much of the research in this area lacks high-quality studies, that would lead to a more robust understanding  of this issue.

In fact, the authors had to slice and dice the data to tease out “positive” findings that included a possible relationship between fast food outlets and obesity in low-income children or an inverse trend for obesity with the availability of supermarkets (a supposed surrogate measure for availability of fresh produce).

Of course, not finding a robust relationship between the food environment and obesity should not be all that surprising, given the many factors that can potentially play a role in obesity rates.

(Readers may recall that there used to be similar enthusiasm between the role of the built environment (e.g. walkability) for rising obesity rates, till the research on this issue turned out to be rather inconclusive. )

None of this should be interpreted to mean that the food or built environments have nothing to do with obesity – however, we must remember that these type of studies virtually never prove causality and that the factors that determine food and built environments are in fact almost as complicated as the factors that determine individual body weights, so finding a robust relationship between the two would be rather surprising.

Allow me to predict that with the increasing trend of fast food outlets offering healthier (or rather less-unhealthy) choices and supermarkets offering ample amounts of “fast food” and a vast array of unhealthy packaged foods, any relationship between retail food environments and obesity (even if it does exist), will be even harder to prove that ever before (outliers are no better than anecdotal evidence and should generally be ignored).

Changing food environments to provide better access to affordable healthier foods should be a “no-brainer” for policy makers, irrespective of whether or not the current environment has anything to do with obesity or not (the same could be said for walkability of neighbourhoods and the prevention of urban sprawl).