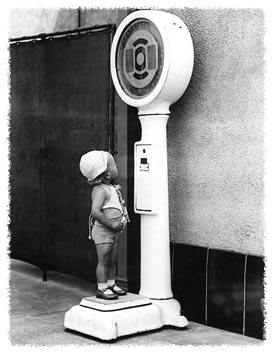 A much-quoted tenet (with little data to support it) suggests that, as a consequence of the increase in childhood obesity, this may be the first generation of kids to not outlive their parents.

This rather gloomy statement is countered by those who believe that the health impacts of excess weight in childhood are drastically overstated and a growing body of evidence that appears to suggest that childhood-onset obesity may in fact be paradoxically “protective” against future cardiometabolic risk.

This “counterintuitive” finding prompted Laura Howes and colleagues, in a paper published in BMJ Open to test the hypothesis that childhood-onset obesity may increase the odds of being a “metabolically healthy” obese adult.

Their analysis included 2392 obese men (mean age 42), selected from over 360,000 young men (mean age 20) examined for Danish national service between 1943 and 1977. A random sample of 3600 others were used as controls. For 613 of these men, data on childhood BMI were available allowing the researchers to summarise childhood BMI growth (7–13 years). Early-onset obesity was defined as obesity at examination for national service.

Despite certain methodological limitation to the study, the authors found no support for the notion that “early-onset” obesity or weight trajectories between ages 7-13 increased the likelihood of being a metabolically healthy obese adult.

While some metabolic risk parameters (e.g. higher glucose levels) were positively (albeit modestly) related to early-onset obesity and faster rates of BMI increase in childhood, the opposite was true for cholesterol levels.

Nevertheless, greater BMI at age 7, faster rate of BMI increase between 7 and 13 years and early-onset obesity were all associated with greater SBP, DBP and pulse pressure, greater glucose levels and a higher BMI in mid-life

Reason enough to continue taking childhood obesity seriously and to do the best we can to prevent it.