Home » blog » Do Variations in Breast Milk Composition Account for the Conflicting Evidence Regarding Its Protective Effects On Excess Weight Gain?

Do Variations in Breast Milk Composition Account for the Conflicting Evidence Regarding Its Protective Effects On Excess Weight Gain? 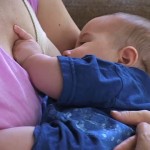 As father of three nursing mothers, I am all for breast feeding. Indeed, in several previous posts, I have cited the epidemiological data to suggest that breast feeding may be protective against childhood obesity.

However, this data is far from clear. There are in fact many conflicting studies on this issue, as a result of which breast feeding as protection for weight gain was presented as one of the “obesity myths” in a recent paper in the New England Journal of Medicine.

Now, a study by Tanya Alderete and colleagues from the university of Southern California, Los Angeles, published in the American Journal of Clinical Nutrition, suggests that the variable reports on the role of breast feeding in protecting against excess weight may be related to variations in its composition.

The researchers studied the composition of human milk oligosaccharides (HMOs) in 25 mothers and correlated these to with infant growth and body composition at 1 and 6 mo of age.

As the authors discuss, diversity and HMO composition of breast milk appeared to have disparate effects on body composition and body weight.

Thus, for example, each 1-μg/mL increase in levels of lacto-N-fucopentaose (LNFP) I was associated with an approximately 1 lb lower infant weight at 1 month and a 1.11-kg lower weight with am 0.85-g lower lean mass and a 0.79-g lower fat mass at 6 months.

In contrast, disialyl-lacto-N-tetraose and LNFPII were associated with small but significant increases in body fat mass.

Overall, these effects are not trivial,

“When examined collectively, LNFPI, DSLNT, and FDSLNH explained 33% more of the variance in infant fat mass than did sex, prepregnancy BMI, weight gain during pregnancy, and 6-mo infant age alone.”

As one potential mechanism, the authors suggest that different HMO’s may have differential effects on gut bacteria in these infants.

“HMOs are thought to aid in the growth and metabolic efficacy of the developing infant micro biome…Although we did not collect stool samples, preliminary findings observed in the current study may be partially attributed to the prebiotic effects of HMOs. In support of this, a recent study found a distinct fecal microbiota composition in breastfed compared with formula-fed infants, in which the fecal microbiota in breastfed infants correlated with the HMOs consumed (particularly LNFPI and DSLNT).”

Whatever the mechanism, as the authors note,

“These findings support the hypothesis that differences in HMO composition in mother’s milk are associated with infant growth and body composition.”

Obviously, these kind of studies cannot prove causality nor do they provide definite mechanistic insights.

However, they may open an avenue to better understanding why the literature is so conflicted when it comes to the relationship between breastfeeding and excess weight gain.