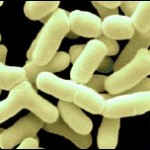 The human intestine is home to trillions of bacteria that are increasingly recognized as playing a role in gut function, both in health and disease. Perhaps not surprisingly, gut bugs have also been implicated to play a role in the development of obesity.

This hypothesis is very much supported by the recent findings of Husen Zhang and colleagues from Arizona State Univerity, USA, just released in the Proceedings of the National Academy of Science.

Phylogenetic analysis demonstrated that although the Bacteria in the human intestinal community were highly diverse, they fell mainly into 6 bacterial divisions that had distinct differences in the 3 study groups.

Specifically, they found that obese individuals had a significantly higher number of both hydrogen-producing and hydrogen-utilizing bacteria in their gut.

Based on their finding, the authors propose that the relatively high numbers of hydrogen-producing and -utilizing bugs and the resulting interspecies hydrogen transfer between them in the gastrointestinal tract of obese individuals is an important mechanism for increasing energy uptake by the human large intestine in obese persons. Specifically, these bugs aid in the fermentation of usually indigestible organic matter (e.g. fiber) resulting in the increased production of short-chain fatty acids, which are absorbed by the gut and can be used as an energy source.

The large bacterial population shift seen in the post-gastric-bypass individuals may reflect the double impact of the gut alteration caused by the surgical procedure and the consequent changes in food ingestion and digestion.

Although the differences between the groups were extremely striking, this is of course a study on only 9 individuals. Future studies will need to see if these observations can be generalized. If yes, it will be of great interest to see if changing the gut microbes from the “obese” to the “non-obese” pattern will in fact change body weight (it is of course also possible that the observed patterns are a consequence rather than a cause of obesity).

Nevertheless, I find these observations most intriguing – I am sure we will be hearing a lot more on the role of gut bugs in obesity in the future.