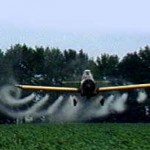 Our environment is full of man-made chemicals, the biological actions of which we rarely fully understand.

There is now considerable data showing that some of these chemicals may well have biological effects that can potentially change metabolism. These compounds are, therefore, sometimes referred to as “endocrine disrupting chemicals” (EDC) and can potentially promote weight gain and cause other metabolic problems including insulin resistance.

Because of their previous extensive usage as pesticides, their inherent structural stability, their persistence in body systems and their ability to concentrate in animals that are higher up on the food chain, many EDCs are currently present in human fat in relatively high levels.

A new study by Mai Elobeid and colleagues from the University of Alabama at Birmingham, just published in the International Journal of Environmental Research and Public Health, examines the relationship between selected organic pollutants and obesity in a representative sample of the US population (NHANES 1999-2002 Data).

In their analyses, the authors found consistent positive interaction between BMI and/or waist circumference with several of the EDCs including oxychlordane, p,p’ DDT, hpcdd.

As the authors point out, “In particular, these chemicals have been shown to disrupt major weight controlling hormones, such as thyroid hormones, estrogens, testosterone, corticosteroids, insulin, growth hormone, and leptin and to alter levels of, and sensitivity to, neurotransmitters (in particular dopamine, noradrenaline, and serotonin.”

While the authors acknowledge all of the caveats and care that must be taken in interpreting these type of associations, they note that their findings are certainly in line with the hypothesis that these chemicals may be plausible contributors to the obesity epidemic.

What this may mean in terms of prevention or obesity management remains even less clear. Nevertheless, there is no doubt that the list of factors that may underly the obesity epidemic is far longer than most people consider.