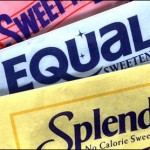 The use of artificial sweeteners, particularly in beverages, is widespread and has been extensively promoted by the food and beverage industry in “diet products”. Paradoxically, however, several large recent studies have consistently shown that increased use of such “diet products” is associated with weight gain.

The same is true in a new study by Sharon Fowler and colleagues from The University of Texas, San Antonio, TX, just out in OBESITY. In this study, Fowler and colleagues examined the relationship between artificially sweetened beverage (ASB) consumption and long-term weight gain in the San Antonio Heart Study. From 1979 to 1988, height, weight, and ASB consumption were measured among 5,158 adult residents of San Antonio, Texas. Seven to eight years later, 3,682 participants (74% of survivors) were re-examined.

Consuming >21 ASBs/week (vs. none) was associated with almost-doubled risk of becoming overweight or obesity in participants with a BMI <30 at baseline. These findings raise the question whether AS use might be fueling–rather than fighting–our escalating obesity epidemic.

If ASBs have no calories, how can this be?

The authors provide several suggestions for this relationship in their paper:

1. Use of artificial sweeteners may just be a “marker” of people who tend to have a weight problem: This sounds quite logical – of course, someone who is experiencing weight gain for whatever reason may be more likely to switch to artificial sweeteners. In the end they still gain weight, but now it looks like using these products is the problem, when it’s not – in fact without these products the individuals may have ended up gaining even more weight.

2. Use of artificial sweeteners may indirectly cause weight gain: There could be several reasons for this including the fact that people make up the lost calories from sugar by increasing their intake of fat (in the end the body always gets the calories it needs). Users of “diet” products may also overcompensate with other foods (because I am having a diet pop (saving = 180 KCal), I can afford to have another burger (overcompensation = 400 KCal) resulting in a net gain of 220 KCal). Thirdly, because artificial sweeteners are so sweet, they may in the long-term desensitize your sweet sensation so that when you do use actual sugar, you tend to need more sugar (= more calories) to experience the same “sweetness”.

Whatever the reason, my advise to my patients is to lay off the artificial sweeteners. Rather, if it must be, a touch of real sugar lightly sprinkled on the food or even half your usual amount in beverages may be a better way to go. I, several years ago, went from two teaspoons of sugar in my coffee to no sugar at all – it took me a while to adjust, but today I no longer like sweetend coffee (I do still have a touch of sugar in my tea).