Home » blog » Did Dieting Make You Fat? Blame Your ‘Proteinstat’

Did Dieting Make You Fat? Blame Your ‘Proteinstat’ 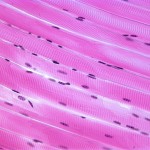 Yesterday, I posted on the intriguing finding (now documented in 15 prospective studies) that dieting can make you fat – especially if you start out with a normal weight.

In the paper by Dulloo and colleagues published in Obesity Reviews, the authors attribute part of this effect to the so far elusive “proteinstat” – a system, similar but different from the “adipostat” – that is designed to protect your lean body mass.

As the paper nicely delineates, the problem with post-dieting weight regain is that the fat comes back first but that the drive to eat does not cease till you have also regained the lost lean body mass (muscle).

It appears as though there are two complimentary biological systems that regulate weight regain.

The better known system is the “adipostat” that worries about protecting and restoring fat mass – the neuroendocrine players include leptin and perhaps other signals derived from fat tissue that signal fat stores to the brain. This system works (primarily through dropping metabolic rate but also through effects on appetite) to very quickly and effectively restore the depleted fat mass after dieting.

The less known system is the “proteinstat”, that apparenty worries about restoring lean body mass. The system works slower than the “adipostat” but continues its activity (often reaching its peak) even after all the lost fat has been regained and you are back to your original weight. In fact, it continuous working (primarily through appetite and cravings) till lean body mass is restored, even if this means gaining even more fat in the process.

In their careful reanalysis of starvation studies, Dulloo and colleagues also come up with an explanation why this process of “weight overshoot” results in more gain the skinnier the individual is to begin with.

“…the lower the initial adiposity, the greater the proportion of energy mobilized as body protein (referred to as P-ratio) during weight loss. The steep part of the negative exponential curve lies between 8–20% body fat, and a shift from the upper to the lower values in this range, generally considered to reflect a ‘normal’range of adiposity for men living in affluent societies, results in 2.5- to 3-fold increase in the P-ratio; the latter constitutes a proxy of the fraction of weight that is lost as FFM since protein belongs to the FFM compartment. This extremely high sensitivity of the P-ratio with regard to the initial body composition emphasizes the critical importance of even small differences in the initial percentage body fat in dictating the individual’s energy-partitioning characteristic and, hence, the pattern of lean and fat tissue deposition during weight loss and subsequent
weight regain, in turn, determining the extent of fat overshooting.”

In other words, lean dieters are far more susceptible to mobilising energy (and thus losing mass) from their muscle than from their fat stores, resulting in a much greater likelihood of overshooting their original weight.

Eventually, as these dieters get fatter with every diet cycle, they get less and less susceptible to this effect, which matches well with the finding that dieting is a far better predictor of long-term weight gain in people with lower fat percentages than in those who already have overweight or obesity).

As for exactly how the “proteinstat” works, much remains unclear. Early work focussed on the notion that certain amino acids may serve as signals of protein stores, however, now work is focussing on the far more plausible theory that some of the over 100 molecules now known to be secreted by skeletal muscle (myokines) may play a role in this system.

Certainly a topic that will be interesting to watch develop over the coming years.