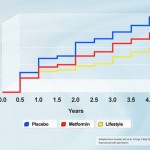 Readers may recall that the original publication showed that in the 2.8 years of intervention, high-risk adults randomised to intensive lifestyle intervention had a risk reduction of 58% in the incidence for type 2 diabetes and a 31% risk reduction with metformin, compared with placebo.

This report now examines whether these effects persist in the long term in 2766 of 3150 (88%) original patients enrolled for a median additional follow-up of 5·7 years. 910 participants were from the lifestyle, 924 from the metformin, and 932 were from the original placebo groups.

During the 10-year follow-up since randomisation to DPP, the original lifestyle group lost, then partly regained weight. In contrast, the metformin group maintained most of the modest weight loss achieved in the first years of the trial.

In contrast to the marked differences in diabetes incidence between groups in the initial study, the incidence of diabetes in this follow-up study were similar between treatment groups: 5·9 per 100 person-years for lifestyle, 4·9 for metformin, and 5·6 for placebo. Interestingly, this finding was not attributable to a rebound effect in the lifestyle group but to a fall in incidence in the placebo and metformin groups that resulted in similar rates as achieved by lifestyle intervention, which changed little throughout follow-up.

Nevertheless, when compared over the 10 years since enrollment in DPP, diabetes incidence was still 34% lower in the lifestyle group and 18% lower in the metformin group than with placebo.

In an accompanying editorial, my Indian friend and colleague Anoop Misra, about whom I have blogged previously, comments:

“Prevention of diabetes is a long and winding road. There seems to be no short cut, and a persistent and prolonged intensive lifestyle intervention seems to be the most effective mode to travel on it. However, more research needs to be done with dietary (eg, high-fibre, low-glycaemic-index foods), physical activity (aerobic plus resistance exercise), and pharmaceutical (especially glucagon-like peptide-based therapies) manipulations to prevent diabetes. We need more effective drugs for those who cannot follow intensive lifestyle therapy because of infirmity. Because of the high prevalence and rapid increase in the metabolic syndrome and diabetes, there is a need to apply these findings to, and generate data from, other ethnic groups and developing countries.”

It may be worthwhile to point out that over the 10 years, there was virtually no weight loss or weight gain in the groups – essentially at the end what all groups had was weight stabilisation. Readers will note that I have previously blogged about the importance of preventing weight gain rather than focussing all efforts on weight loss – especially when it comes to prevention. This is in fact what we recommend for both Edmonton Obesity Stage 0 and 1 patients.