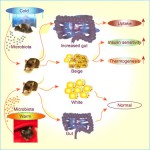 It seems that there is no end to how intimately gut microbes are linked to metabolic function.

Thus, a study by Claire Chevalier and colleagues from Geneva, Switzerland, published in CELL, not only shows that cold exposure (of mice) changes their gut microbes but also that, when transplanted into sterile mice, these “cold” microbes stimulate the formation of thermogenic brown fat.

All of this makes evolutionary sense, as the increase in heat-generating (and calorie-burning) brown fat with cold exposure would protect the organism against cold exposure – however, that gut bacteria would be involved in this process is indeed rather surprising.

Unfortunately, at least for those thinking that “cold bacteria” may be the panacea for stimulating brown fat and thus weight loss are likely to be disappointed.

The researchers also show that with prolonged exposure to cold, these “cold bacteria” induce changes to the structure and function of the gut that enable more glucose to be absorbed.

While in the short-term, this extra fuel can be used by the brown fat to generate heat, in the long-term, some of these extra calories probably go towards building more white fat and thus weight gain.

Again, this makes evolutionary sense. After all, it is ecologically a far better strategy to insulate the house than to waste extra calories heating it.

This is why, the naive notion that simply lowering ambient temperature as a means to generate more brown fat and thus, burn more calories, may not be all that effective.

Funnily enough, these findings turn the hypothesis that reducing room temperature would promote weight loss into exactly the opposite. Perhaps it is the excessive use of air-conditioning to generate freezing indoor temperatures (as any European visitor to the US will readily attest to), is part of the problem.

Fascinating stuff for sure.