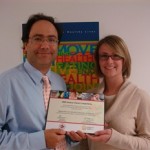 In her political science masters thesis, entitled “Challenging Inadequate Policy Responses to Childhood Obesity: What’s holding us back?“, completed under the supervision of Colin Macleod at the University of Victoria, Purcell argued that misguided public policies that fail to protect the health of children undermine the fight against childhood obesity.

Thus, Purcell argues, that governments’ reluctance to enshrine certain rights for children lest they infringe on the private rights of adults – by ensuring access to proper nutrition and exercise, mandating healthy environments and regulating commercial access to children – has played a key role in allowing the obesity epidemic to flourish.

What’s urgently required, she wrote, is a policy approach that views children ‘…as the responsibility of [both] the public and private spheres, which does not threaten the family, but recognizes the existing influence of the state and commercial interests on childhood obesity.’

“It’s not enough to say that we’re going to educate people about how to lead a healthy lifestyle – we’ve been doing that for a long time, and the problem isn’t going away”

“Ultimately, we need to question the underlying limitations of the approach we’ve taken, and examine what’s held us back from taking the steps that would ensure our children are able to lead a healthy life.

“I think that requires asking some tough ethical and moral questions, as well as looking at the political context of private versus public responsibility.”

My comment on this issue, as quoted in the press release:

“The fact that obesity is now of interest to disciplines outside the health sphere – in this case, political scientists – demonstrates how pervasive the issue is in our society, as well as the wide range of expertise and collective will that are needed to rectify the problem.”

“Megan has asked a very thought-provoking question – beyond ‘have we as a society failed our children?”, because clearly we have in some way, but rather ‘what can we do from a policy perspective to enshrine the right to healthy living for young Canadians?”

As long as we have young people in Canada asking these questions – we’re probably headed in the right direction.