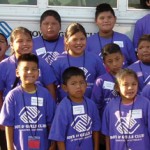 Despite the wide-spread concern about the health impact of the childhood obesity epidemic, there is actually not much data that directly shows how this excess weight may affect mortality.

Such data is now available at least for native American kids, from a study by Paul Franks (National Institutes of Health, Phoenix, AZ) and colleagues, just published in the New England Journal of Medicine.

The researchers analysed data from a cohort of 4857 American Indian (Pima or Tohono O’odham Indian) children without diabetes (mean age, 11.3 years) born between 1945 and 1984.

Thus, at least in native Americans, childhood obesity is a significant risk factor for premature death – certainly a warning for those who believe that early obesity is something you can simply grow out of.

Given the raging epidemic of childhood obesity amongst the First Nations, Inuit, and Métis populations in Canada, these data should certainly prompt decisive action to address obesity amongst its native peoples.