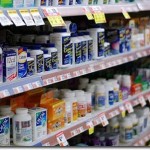 Apart from the fact that there are indeed no weight-loss supplements that will help you lose more than the weight of the money in your back pocket (a fact that even Dr. Oz had to admit to at a recent senate inquiry into the rubbish he promotes on his shows), there may be reason to suspect that the use of such supplements may in fact do the opposite.

Thus, a rather simple experiment by Yevvon Chang and Wen-Bin Chiou from Tunghai University, Taichung, Taiwan, published in Nutrition, suggests that taking a (supposed) weight-loss supplement may actually lead to greater caloric intake.

This field study was conducted in 70 volunteers, who were randomised to taking a either placebo or a weight-loss supplement (the same placebo) and were then exposed to a buffet meal.

Or, as the authors summarise,

Obviously, it is hard to extrapolate from such a short-term experiment to what happens over time – especially when people do follow the lifestyle recommendations that come with most supplements (eat-less-move-more).

This study certainly is in line with the recent observation that people who take statins to lower their blood cholesterol levels tend to eat unhealthier diets and may in fact end up gaining more weight than people who don’t.

Thus, it may be time to study the “fattening” effect of weight-loss supplements. Perhaps the only reason that we have not yet observed this effect in larger studies is because very few people stay on these nonsensical agents for more than a few weeks.