Can Mental Work Make You Hungry? 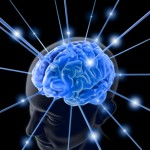 While we all know about working up an appetite with physical activity, the same may very well be true of mental work – at least for women.

Thus, a study by Miram Salama and colleagues from Laval University, QC, published in Physiology and Behavior, shows that mental work may very much influence food preferences and satiety.

Using a cross-over design, 35 healthy young adults were randomly assigned the one of the two following conditions: mental work (reading a document and writing a summary of 350 words with the use of a computer) or control (rest in seated position).

After 45 mins of each condition, participant were offered a standardized ad libitum buffet-type meal. Appetite sensations (desire to eat, feeling of hunger, fullness level and estimated amount of food that can be consumed) were measured using a visual analogue scale (VAS).

While women selectively increased their preference for carbs, men reduced their intakes of dessert.

In both men and women, participants with the highest waist circumference also had the lowest satiety efficiency in response to mental work.

These results suggest that mental work can change energy intake and preferences in both men and women, albeit in different directions.

Why this would be is anyone’s guess – it is also not clear exactly how this mechanism works. One speculation would be that there are differences in how men and women respond to mental stress – but that is certainly work for a future study.