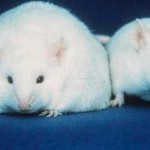 At one time in my research career, I was enamoured by the potential role of the renin-angiotensin system in the biology of adipose tissue – in fact, my lab was one of the first to characterize this system in human tissue.

Since then, my interests have moved on to a other things but I still keep an eye open for research on this system as it relates to body weight.

Thus, the recent work by Martina Winkler and colleagues from the University of Lübeck and the Max-Delbrück-Centre for Molecular Medicine in Berlin (where I used to work), published in the British Journal of Pharmacology caught my attention.

Compared to SD rats, the brain-angioteninogen-deficient rats had lower weights during chow feeding, did not become obese during a high-caloric diet, had normal baseline leptin plasma concentrations independent of the feeding regimen, showed a reduced energy intake, had a higher, strain-dependent energy expenditure which is additionally enhanced during high-caloric feeding, had enhanced mRNA levels of pro-opiomelanocortin, and showed improved glucose control.

While the Angiotensin type 1 receptor blocker telmisartan reduced weight gain and energy intake in control rats, it had less effect in the brain-angiotensin-deficient rats

Thus, the researchers conclude that the brain renin-angiotensin system may play an important role in body weight regulation, feeding behavior, and metabolic disorders – at least in rats.

How relevant these findings are for humans remains doubtful.

For one, the widespread clinical use of inhibitors of the renin-angiotensin-system (ACE inhibitors, AT1 receptor blockers) are not generally associated with clinically significant weight loss. However, this may be because most of these agents do not reach high enough concentrations in human brain tissue. But it may also well be that this system is less important for body weigh regulation in humans than in rodents.