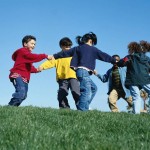 The German language is pretty creative, when it comes to inventing composite words that precisely describe a concept or situation for which there is no simple term in English.

A recently popularised example is the term “Schadenfreude”, which describes the satisfyingly pleasurable feeling that you get from “karma” doing its thing to someone who clearly deserves it.

At yesterday’s symposium on nutrition and physical activity, hosted by the Plattform Ernährung und Bewebung (PEP) in Berlin, a term that caught my attention was the word “Bewegungslust”.

A literal translation of this term would fall along the lines of “lusting for movement” or, in other words, having an “appetite” for physically activity.

The audience was reminded that physical fitness programs (e.g. in schools) should be specifically designed to enhance “Bewegungslust” and not to kill it off (as unfortunately often happens when school fitness programs feed into jock culture, with barely concealed contempt for kids who happen to be less physically able or endowed than their peers).

There was also the use of the related term “Bewegugsdrang”, which describes the “intense urge for movement”, often see in kids (and adults), who will happily engage in spontaneous physical activity, especially after a forced period of inactivity (such as sitting around in a class room).

Thus, school fitness programs aiming to get all kids moving, need to tap into the natural “Bewegungsdrang” of their young charges with programs that encourage, develop, and reinforce their “Bewegungslust”, thereby helping them experience “Bewegungsfreude” (=“the joy of movement”) on their way to lifelong fitness.