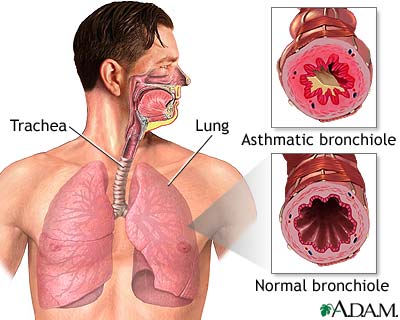 Although asthma is generally overdiagnosed in overweight and obese individuals, when present, excess weight tends to markedly exacerbate the symptoms of dyspnea and respiratory distress.

It is therefore of interest to note that a study by Louis Philippe Boule and colleagues from the University of Laval, QC, published in the latest issue of Respiratory Medicine, reports marked improvement in respiratory symptoms following bariatric surgery.

This prospective study carefully evaluated 12 asthmatic patients with severe obesity before, 6 and 12 months after bariatric surgery to respiratory parameters in 11 severely obese patients with asthma, who served as control.

BMI decreased from 51.2 to 34.4 at 12 months, in the intervention group, and this fall in weight was associated with a marked improvement in PC(20) methacholine, FEV(1), FVC, FRC, FRC/TLC and ERV all improved (apologies to my lay readers – these are all standard measures in lung-function tests).

No significant changes of these parameters from baseline were observed in asthmatic controls.

Thus, these findings show a consistent and dramatic impact of weight loss with bariatric surgery on airway responsiveness, lung volumes, and asthma severity.

Together with the well-known improvements in obstructive sleep apnea, this study certainly adds to the significant respiratory benefits of bariatric surgery for patients with severe obesity.