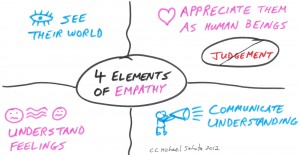 Next in my miniseries on arguments for calling obesity a disease is the issue of empathy.

Our normal response to people who happen to be affected by a disease – including lung cancer and STDs – is at least some measure of empathy (even if residual stigma continues to exist).

Even if the disease was entirely preventable and you did your lot to hasten its development, once you declare yourself as having diabetes, or heart disease, or stroke, or cancer, the expected social response is empathy – and not just from family, friends, and colleagues.

But apparently not towards people affected by obesity.

No empathy, so sympathy, no understanding, no compassion – i.e perhaps until we call obesity a “disease”.

Then, suddenly, everything changes – because diseases demand empathy.

Perhaps this is the real reason that some folks are so vehemently against calling obesity a disease – to fully accept that obesity is a disease, they would have to show empathy – not something they feel people living with obesity quite deserve.

After all, how can you still make jokes and poke fun at people living with a disease?

How can you still shame and blame people living with obesity, if we call it a disease?

How can you still wage a “war” on obesity – take no prisoners?