Home » blog » Arguments Against Obesity As A Disease #9: Its Just A Risk Factor

Arguments Against Obesity As A Disease #9: Its Just A Risk Factor 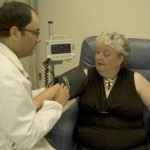 Next, in my miniseries on arguments I commonly hear against the notion of calling obesity a disease, is that it is “just a risk factor” for other diseases.

This may be true, if you just (wrongly) considered elevated BMI as your definition of obesity, because no doubt, people with higher BMI levels carry a higher risk for obesity related complications including type 2 diabetes, sleep apnea, fatty liver disease, hypertension – just to name a few. (Note that increased risk is not the same as actually having the condition!).

However, when you use the actual WHO definition of obesity, namely, “accumulation of excess or abnormal fat that impairs health”, obesity is no longer just a risk factor – it is now (by definition) impairing your health, which makes it far more than just a risk factor.

So while someone with a BMI of 35 may be at risk of developing obesity (not the same as having it), when their excess fat actually starts impairing their health, it de facto becomes a disease in its own right.

Even then, one might argue that obesity itself is not the disease, rather the complications of obesity are the real disease.

This notion is both right and wrong.

There are many conditions that are both diseases in their own right as well as risk factors for other diseases or complications.

Take type 2 diabetes for instance – it is both a disease in itself but also a risk factor for coronary heart disease or end-stage kidney disease.

Take hypertension – a disease in its own right but also a risk factor for strokes and heart attacks.

Take gastro-oesophageal reflux disease, which is also a risk factor for Barrett’s disease and oesophageal cancer.

Take fatty liver disease, which is also a risk factor for cirrhosis.

Gall bladder stones, which is also a risk factor for pancreatitis.

Multiple sclerosis, which is also a risk factor for neurogenic bladder and pyelonephritis.

So just because obesity is also a risk factor for a wide range of other medical problems, it does not make obesity any less of a disease in its own right.

When excess or abnormal body fat affects health – it’s a disease. When it doesn’t, it’s at best a risk factor.

That, is perhaps a subtle but important distinction.