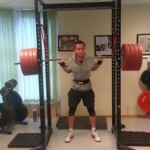 My recent reading of the paper by Dulloo and colleagues on post-dieting weight gain in non-obese individuals, reminded me of my clinical observation that a surprisingly large proportion of patients I see in our bariatric clinic report a history of competitive sports.

When I have previously discussed this observation with colleagues, the answer I often get is that this weight gain is simply due to the fact that active athletes are used to eating a lot, which they continue to do after their activity levels decline, thus resulting in weight gain – a theory, I don’t quite buy largely because it appears far too simplistic (and I have yet to see any evidence to support it).

Rather, if the phenomenon of weight-cycling induced weight gain is real, one would assume that not all athletes are at risk, but rather that this phenomenon would be limited to athletes in disciplines where weight cycling (e.g. to meet certain weight criteria), often referred to as “weight cutting”, is part of the culture of that sport. Examples of such sports include wrestling, boxing, and weight lifting.

It turns out that this very issue has been studied by Saarni and colleagues, who, in a paper published in the International Journal of Obesity, report their findings on a large national cohort of 1838 male elite athletes who had represented Finland in major international sport competitions in 1920-1965.

This cohort included 370 men engaged in sports in which weight-related performance classes are associated with weight cycling (boxers, weight lifters and wrestlers) and 834 matched control men with no background in athletics.

Over the 20+ years of follow-up, the weight-cycling gained a whooping 5.2 BMI units from age 20 years to their maximum mean weight (at around age 60) conpared to only 3.3 BMI units in non-weight-cycling athletes or just 4.4. BMI units in the non-athletic controls.

Indeed, weight-cycling athletes were about three times as likely to develop obesity (defined as a BMI > 30), than their non-weight cycling colleagues or controls.

This enhanced risk of developing obesity in weight-cycling athletes remained significant even after correction for a number of potential confounders including health habits (smoking, alcohol use, use of high-fat milk or physical activity) or weight at age 20 years.

While this paper does not prove causality, or for that matter, provide any insights into possible biological mechanisms that would promote weight gain, it is certainly consistent with the hypothesis that repeated cycles of weight loss and regain in people who start out with a normal weight (in this case elite athletes) strongly predicts subsequent weight gain and the development of obesity.

“The weight cycling behavior of the former athletes engaged in power sports at a young age resembles that of young dieters who lose weight temporarily and soon regain it. The present observations concerning the enhanced weight gain of these athletes raise the concern that the repeated cycles of weight loss and regain caused by dieting at a young age could similarly affect weight in the long term.”