Home » blog » Are We More Susceptible to Obesity Than Before?

Are We More Susceptible to Obesity Than Before? 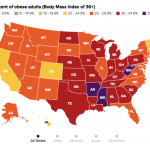 Regular readers will be familiar with my wariness of epidemiological data on diet and activity – especially, when these are self-reported.

Nevertheless, for what it is worth, a publication by Ruth Brown and colleagues from York University, Toronto, published in Obesity Research and Clinical Practice, suggests that people today may be more susceptible to obesity than just a few decades ago.

The study looks at self-reported dietary from 36,377 U.S. adults from the National Health and Nutrition Survey (NHANES) between 1971 and 2008 and physical activity frequency data from 14,419 adults between 1988 and 2006 (no activity data was available from earlier years).

However, for a given amount of caloric intake, macronutrient intake or leisure time physical activity, the predicted BMI was up to 2.3kg/m2 higher in 2006 that in 1988.

So unless there was some major systematic shift in what people were reporting (which seems somewhat unlikely) it is clear that factors other than diet and physical activity may be contributing to the increase in BMI over time – or in other words, it appears that people today, for the same caloric intake and physical activity, are more likely to have a higher BMI than people living a few decades ago.

There are of course several plausible biological explanations for these findings including epigenetics, obesogenic environmental toxins, alterations in gut microbiota to name a few.

If nothing else, these data support the notion that there is more to the obesity epidemic than just eating too much and not moving enough.