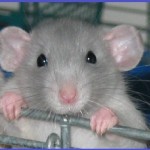 One of the most common notions of why obesity is so rampant today is because most of us carry in us the genetic ability to avidly take up calories when they are around and use them sparingly when they are not.

This notion has been called the “thrify genotype” and has been credited with allowing our ancestors to make it through the millenia of feasts and famines, while being blamed for the obesity epidemic today.

But does the genetic ability to become fat really bestow a survival advantage?

This question was addressed by David Pierce and colleagues from the University of Alberta in a paper just published in the International Journal of Obesity.

In this study, young genetically obese and lean-prone rats were exposed to a rigorous regimen of sparce food and ample exercise (wheel running).

Although the obese and lean-prone rats started out at the the same initial body weight, the obese-prone rats survived twice as long, and ran three times as far, as their lean-prone counterparts.

This study clearly demonstrates that (at least in rats), carrying the genes for obesity confers a huge survival advantage during severe food restriction and strenuous exercise. In fact, even unders these “thrifty” conditions, the obesity prone animals were able to conserve their fat mass by being far more efficient (energetically) than their lean counterparts (same amount of work for fewer calories).

Thus, these findings not only support the hypothesis that an obese-prone genotype provides a substantial fitness advantage when the going gets tough but also shows why the same amount of dieting and exercising simply does not lead to the same amount of weight loss for everyone.