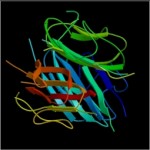 As regular readers of this blog should know by now, obesity is associated with increased risk for cancers. While the reason for this may be seemingly straightforward for cancers linked to sex hormones affected by excess weight such as breast or endometrial cancers, how exactly does this work for colon cancer?

According to a new study just out in JAMA, the missing link may well be the adipocyte-derived hormone adiponectin, levels of which are well-known to be reduced in obese individuals.

Following previous reports on an association between circulating adiponectin levels and colorectal cancer risk, Virginia Kaklamani from the University of Alabama, Birmingham, and collaborators examined the relationship between genetic variants of the adiponectin (ADIPOQ) and adiponectin receptor 1 (ADIPOR1) genes with colorectal cancer.

Based on the DNA analysis of participants in two independent case-control studies together including around 600 patients with a diagnosis of colorectal cancer and an equal number of matched controls, the researchers found significant associations between genetic variants of these genes and colorectal cancer risk.

Specifically (for geneticists who happen to read these lines), the SNP rs266729, which tags the 5′ flanking region of the ADIPOQ gene, was associated with decreased colorectal cancer risk.

This study of course does not reveal the exact mechanism of the link. Although adiponectin receptors are present in colon mucosa, adiponectin may also act indirectly by influencing levels of insulin or insulin-like growth factor (IGF1).

So what does this mean?

Firstly, the strength of the association is hardly enough to warrant a diagnostic test for colorectal cancer risk based on this gene. Secondly, just because adiponectin levels are inversely related to cancer risk, does not necessarily mean that simply raising adiponectin levels (for e.g. through weight loss) will help prevent colon cancer (although we do know that weight loss reduces cancer risk). Thirdly, as noted above, the study does not actually provide any new insights into a mechanistic link that directly explains how this genetic variant possibly leads to carcinogensis in colon cells.

So why bother writing about this?

Well for one, adiponectin is of special interest to anyone studying obesity, as it appears to be one of the key factors linking excess adipose tissue to increased risk for diabetes and heart disease. Secondly, tying in adiponectin (or rather lack of it) to cancer risk, to me at least, is a rather novel concept that I will certainly be following closely in the future.