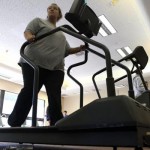 The fact that it is better to be fit and fat than skinny and unfit is not new – indeed, I would regard the evidence on this as pretty conclusive.

Nevertheless, for those, who still harbour any remaining doubts, the study by Ulf Ekelund on behalf of the EPIC Investigators, recently published in the American Journal of Clinical Nutrition should drive this message home.

This analysis looks at the relationship between physical activity and all-cause mortality in 334,161 European men and women followed for about 12.4 y (corresponding to 4,154,915 person-years).

No matter how the researchers looked at the data, activity levels appeared a better predictor of mortality than BMI or waist circumference.

Thus the authors calculated that while avoiding all inactivity would theoretcally reduce all-cause mortality by 7.35%, trying to maintain a “normal weight” (or rather a BMI less than 30) would reduce mortality by only 3.66% (although avoiding obesity AND inactivity did have the greatest effect).

Despite the limitations of these type of cross-sectional analyses, which as a rule, tend to overestimate the potential benefits of an actual intervention, the message is clear – it appears that even small increases in physical activity in inactive individuals can have substantially greater benefits to health than obsessing about losing a few pounds.

This is indeed useful information, as we have long known that increasing physical activity in most cases does surprisingly little in terms of weight loss but rather a lot in terms of increasing health and fitness.

So do not despair if the hours your patients are putting in at the gym are not changing those numbers on the scale – the health benefits are still worth the effort.