About Cognitive Distortion and Taking 20 Years to Race 100 Metres 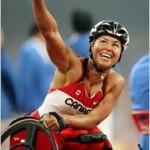 This weekend I spoke Montreal at the 2010 Annual Meeting of the Dietitians of Canada. The closing presentation of the conference was given by Chantal Petitclerc, Canada’s elite Paralympic wheel chair racing champion.

In a moving presentation, Chantal spoke about how, after losing the use of her legs in a farm accident at age 13, she eventually discovered wheel chair racing, which set her off on a ride of Olympic proportions. Since winning her first bronze medals in Barcelona in 1992, she officially ended her Paralympic racing career with winning golden medals in all five wheel chair racing distances at the Beijing Paralympics in 2008.

Of all her twentyone Paralympic medals, the one she is particularly proud of, is the one she got for beating her two closest Chinese competitors by covering 100 metres in around 16 seconds for a spectacular finish in front of 91 thousand cheering spectators at Beijing’s Olympic stadium.

But while the actual race may have taken just a few seconds, Chantal cleverly notes that it actually took her 20 years of hard work and perseverance to win that race – years of training, four hours daily, six days a week, 11 months a year, with all the ups and downs, highs and lows, wins and losses.

Clearly, Chantal is also a world champion in cognitive restructuring. Not only did she have to restructure her thoughts after her accident to realise that her life was not over but also had to constantly overcome all the psychological barriers inherent in a career as an elite athlete.

Certainly, there was no place for any “all or nothing thinking”, “shoulds and musts”, “excuses and rationalisations” or “catastrophising”, typical mistakes we often make that stop us from persevering with our goals and quickly recovering from setbacks.

Learning how to avoid and restructure negative thoughts is critical for long-term behaviour change and should therefore be a key element of any evidence-based weight management program.

If Chantal had given up after blowing a training day, had not constantly changed and adapted her training strategy to deal with changing circumstances, had made excuses for or rationalised her setbacks, had given in to thoughts that any race lost was the end of her career, she would not have ended up where she did.

Thinking you blew your “diet” because you took a bite of the “wrong” food, thinking you “should” or “must” reach a certain weight, always blaming your setbacks on others, or thinking that any pound regained is just the first step to gaining it all back again, are all surefire ways to failure.

Fortunately, with professional help, negative thinking and thought distortions can be overcome. As Chantal pointed out, she would probably not have won her 100 m Gold metal in Beijing had she not regularly Skyped with her sport psychologist.

Successfully maintaing weight loss is like training for the olympics – one day at a time!