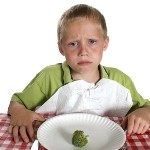 …is the title of a great article on the issue of “nutritional parenting” by Tara Parker-Pope published in the September 14 issue of the New York Times.

The following is what I took from the article:

1. Sending children out of the kitchen: although kitchens can be dangerous places and kids get in the way – research shows that kids are more likely to eat foods that they helped prepare (even salads!).

2. Pressuring them to take a bite: kids are likely to end up hating foods that they have been either forced or rewarded to eat.

3. Keeping ‘good stuff’ out of reach: kids whose food is highly restricted at home are far more likely to binge when they have access to forbidden foods – if you don’t want your kid to eat it – don’t buy it.

4. Dieting in front of your children: kids of dieters are more likely to try diets as well, a perfect recipe for future eating disorders or a lifetime of dieting.

5. Serving boring vegetables: at least make the effort to make them interesting – add some fat and spices – who enjoys steamed vegies?

6. Giving up too soon: research shows that in young children, it may take 10 or more attempts over several months to introduce a new food – keep trying!