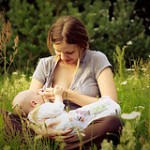 But how long should infants be breast fed to prevent obesity?

This question was addressed in a paper by Hunsberger and colleagues from 8 European countries (Italy, Estonia, Cyprus, Belgium, Sweden, Hungary, Germany and Spain) published in Public Health Nutrition.

After controlling for education, income and other potential confounders, breast-feeding exclusively for 4-6 months were about 30% less likely to be overweight when compared with children never exclusively breast-fed. This association could not be explained by socio-economic characteristics or maternal overweight.

Thus, the authors conclude that exclusive breast-feeding for 4-6 months may confer protection against overweight in addition to other known benefits. Exclusive breast feeding beyond 6 months did not appear to have any additional benefit in this regard.

While association studies do not prove causality, there are certainly a number of biologically plausible hypotheses that would explain the beneficial effect of breast feeding on the development of childhood obesity, so certainly this is a finding that should not be simply dismissed.

I wonder though how feasible exclusive breastfeeding for 4-6 months would actually be in most settings.